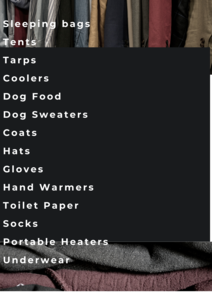 S2S Social Media Team has made a list of the supplies we are trying to collect for the Spreading Smiles and Sandwiches organization
Mrs. Kettinger and Mr. Smith are collecting supplies that are brought in. We will be distributing the donations in March when Spreading Smiles and Sandwiches sets up to feed and clothe our homeless population. They go one Sunday a month, so we have until the second Sunday of March to collect the supplies. This originally started as an Order Project for Houses Bedivere and House Malory, but we are now inviting the rest of the middle school (and any other grade that wants to help) to join in to bring some supplies to our population in need in the Springs. Donations are to be brought to Mr. Smith and Mrs. Kettinger from now until our day we meet with the organization.